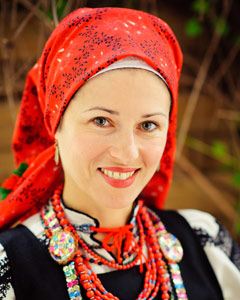 Elena Mironova – a russian folklorist and ethnosinger, born and raised in Russia, has lived in Germany since 2003.

Elena was born in a russian town Saratov on Volga. Her greate grandma sang traditional russian chants and many of the folksongs she learnt from her. Elena graduated first as a germanist from the State University in Saratov, than she had been studiing Slavistics and Comparatistics in Munic. Parallel to her studies in germanistics and comparatistics she undertook training as a singer and piano player. Daughter of the Russian composer Yurij Massin, she learnt Russian and wold music, and got to know russian folklore with a professional musical approach.

Elena has been involved with Russian folklore music for many years. She researched in musical archives and literature. Elena also attended courses in folklore and ethnography by famous russian folklorist and ethnomusicologists: A.S. Kabanov, E.S. Kostina, V. Putilovskaya, I.E. Petrov, N.V. Silina. 2012 Elena has undertaken ethnographic expeditions to the remote villages of Russia (regions Saratov and Volgograd). In these expeditions Elena recorded and learned the songs carried from generation to generation for centuries only by the oral tradition. She also learned village customs, dances and ceremonies. As well she collected authentic musical instruments and costumes.

Elena began her stage career as a singer in POLYNUSHKA, Russian folk group in Berlin.
Since 2010 Elena is a leading singer and artistic director of LEPOTA, a folklore ensemble she founded and led since 2010. She allso gives workshops in traditional russian singing, dancing and handcrafts. In Berlin Elena is involved with another musical projects. Since 2013 she is a part of the jazz-rock Band STOART www.stoart.de: vocals, flutes, percussions. 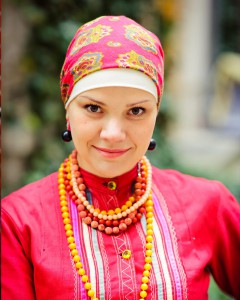 Anna Chernysheva was born and raised in Ulyanovsk. Her parents had been active politicians and activists in the Youth Movement of Ulyanovsk. Her preference for the Russian folklore developed in early childhood, under the great influence of her uncle Vladimir Ionov. Poeples Artist of Russia and Honorary Freeman of Ulyanovsk – he guided the folklore ensemble VOLGA. Anna had been fascinated of traditional russian dances and original costumes of the Ensemble VOLGA. The uncle Vladimir was also an active researcher of the local folk traditions and customs. For the last 30 years he has organized numerous ethnographic expeditions to remote villages in Region Ulyanovsk. The main focus of his ethnographical research was the dance tradtitions of Volga peoples.

In Ulyanovsk Anna graduated from the Music School for gifted children in subjects piano and vocal. After moving to Germany in 2003 Anna studed German Linguistics and European Ethnology at the Humboldt Univertsity Berlin. From 2008 till 2012 she was a part of the vocal ensemble PEREPJOLOCHKI.

Russian folk music remains a big part of Anna’s identity, and after many years of living in Germany, it was a delighting experience for her to discover the ensemble LEPOTA. She is deeply fascinated by the heartiness and emotionality of a russian vocal tradition on the one hand and by the complexity of the polyphony of russian folk songs on the other hand. Since 2012 Anna Chernyshova is one of the best-love and talented members of LEPOTA. She is also a wonderful craftswoman and creates traditional Russian hand woven belts, bags and souveniers. 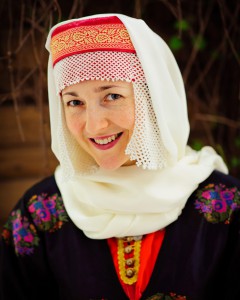 Olga Forschner – a choirmaster, singer and instrumetalist, born in Tomsk (Russia), has lived in Germany since 2008.

As a child Olga Forschner was deeply inspired by her grandmother, a Terek Cossac exiled to Sibirian Taiga, a wonderful singer and needlewoman. Olga graduated from the conservatory Novosibirsk specializing in choirmaster, piano and recorder. From 1995 tilll 2008 she had been working as a singer and instrumentalist at the state Philharmony Novosibirsk (vocal Ensemble MARKELLS VOICES). The repertoire of MARKELLS VOICES included old, classical and modern music, as well russian and georgian folklore. In parallel Olga had been working as conductor of the children Ensemble INTRADA at the Music High School Novosibirsk and as vocalist in the band LOS GRINGOS (latin-american ethno- and popmusic). Later she founded and leaded her own music group MARIACHI (authentic mexican folk music).

In Berlin Olga teaches piano, recorder and vocal. She also plays organ at the Protestant Church Bergfelde near Berlin.

2001 Olga Forschner became a member of Ensemble LEPOTA. By LEPOTA she could live out her big affinity for Russian folklore. Olgas versatile voice, her music and artistic talent makes her to an essencial figur of the ensemble. 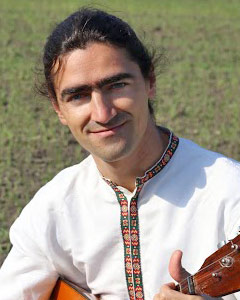 Artur Stoll – a multi-instrumetalist and singer, was born 1984 in Kasachstan. His childhood he spent in Russia. 2000 he moved to Berlin with his family.

Artur’s music interests include not only classical guitar, which he has been plaing since his childhood, but also e-guitar, bass-guitar, drum and percussions. He played guitar in a numerous rock bands AEROPLAN, SIXTY BEATS, STATUS, organised jam sessions and composed music.

2012 Artur became a member of the ensemble LEPOTA. In LEPOTA he plays percussions, balalaika, guitar and sings vocal parts. This versatile man enriched LEPOTA as a gifted musician, sound engineer and wonderful organiser.

Parallel to LEPOTA Artur is involved with his music project STOART. More informations about STOART you can find on its home page: www.stoart.de.